A Love Of RottweilersAll about Bullet, my best friend for life | A-Love-Of-Rottweilers 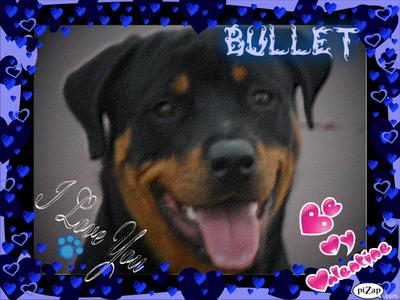 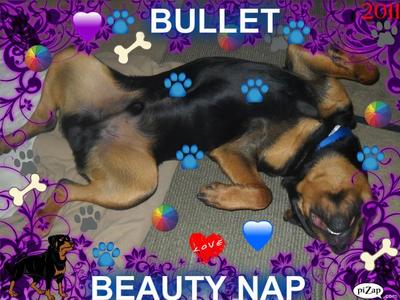 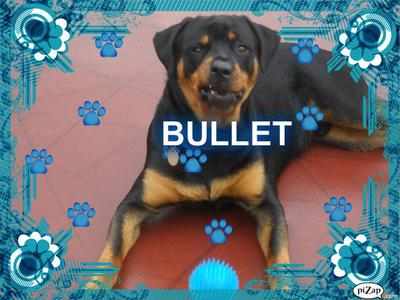 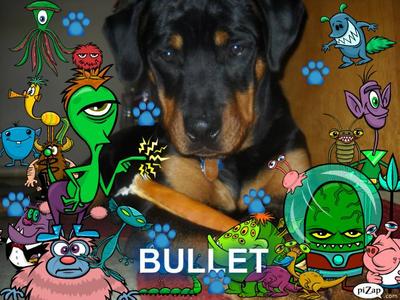 Bullet is 2yrs. old. I’ve had him since he was 4wks. old. He had to leave the litter early and he was also the runt and since then I became his mom.

We have a good relationship and he loves his family which includes my husband Carl, my son Shane and myself.

Bullet was given to me as a birthday present and from that day forward I fell head over heels with him.

He’s a bit stubborn but we train and spend time with him on a regular basis. Everyday he learns something different. I am disabled and he keeps a close eye on me. My husband and son take him out for exercise everyday,and everyday while outside he is also taught the things he needs to learn especially stopping to cross the street, but he gives a problem sometimes when it’s a hot day cause Bullet hates the heat.

He is very well trained when it comes to potty time. He will hold it for hours sometimes just to avoid the walk in the heat. As you can tell Bullet is an inside pet and loves the fan and air-conditioning. He has plenty of toys and busy treats so he doesn’t get bored inside. He loves his treats and that’s what we use most to train him.

He gives hi-5, he speaks, he sits, he rolls over and really a lot of other things that he’s trained to do. Sometimes he gets a lil stubborn and wants things his way, and oh yes he also knows what time out is and gets punished when he is disobedient. He hates to be punished and all you have to do is mention the word. He has tested us a few times but my husband and I firmly let him know who’s boss. we can never let our guard down cause he will try to do what he wants.

As for my 20yr. old son well, we have to work on him too cause he tends to give Bullet his way just like any kid, lol. We never ever use abuse even if Bullet does something really bad. Bullet takes his regular trips to the vet and we make sure he is properly vaccinated. He also takes allergy and separation anxiety meds cause he has a bad case of anxiety when we have to leave him.

We live in Arkansas and the allergy seasons are so bad for him. He is so protective of us especially at night when we are walking him to go do his business. I wouldn’t say Bullet is aggressive although his vet thinks he is. I think too when Bullet is out of his comfort zone he acts up too and like children he doesn’t like going to the doctor.

I just think because he is a rottie I tend to get a lil nervous cause sometimes he is unpredictable. He can tell a bad person right away. He doesn’t like to be held back when he sees other dogs but I have been gradually giving him a lil more space when it comes to introducing him to other dogs cause I learned that holding him back from doing what dogs do to introduce themselves was frustrating him. He has gotten better with the introducing area and now he loves to play with other dogs but sometimes when he is near another male I think this man thing kicks in and he becomes territorial as well as showing the other male who the boss is, you know like they trying to see who has the biggest muscles, lol.

His diet is good and he weighs 105lbs. I feed him Chef Michaels which is a beef, which is sirloin steak, a potato and a veggie of green beans. It’s a bagged dry food that only certain stores carry it. I had to try different foods to see which one he would like. The first full yr. I gave him Beneful. He also likes a can of wet food in his dry food which is his lamb and rice. He loves lamb and rice which I think is the best healthiest for a dog.

When Bullet has an upset stomach we let him eat some grass or I will fix him some plain brown rice with plain cooked ground beef if I’m worried about him eating. Sometimes I noticed some white foaming that he throws up when he’s not feeling well and most time that’s cause he has eaten something that was not ingestible or digestible.

Whenever I want to learn something about my rottie I either go to the akc websites or I’ll go online to other websites that have the best info. You can learn a lot just by doing research if you are serious about learning about your rottie and this is how I came across this website and I love it.

I also have him on a alaskan fish oil vitamin which is good for his heart, coat, skin, and a few other things. It is also good for their behavior. Just read up on fish oil for dogs. I also have the pump bottled liquid but Bullet doesn’t like the smell. I try to give him everything that’s good for him although you know sometimes everything is impossible.

We live in an apt. but if you give him plenty exercise and have many toys and things to keep him busy he will not and has not gotten into anything that’s not for a doggie. Just like people dogs get bored with the same things.

Well this is about sums it up and how I love my rottie. Always go online to websites like this one to learn what’s best for your baby.

I hope some things might be of good help. Keep your dog exercised and with good nutrition, vaccinated and walking and fetching are the two most important things to do to keep your dog happy and healthy not to mention LOVE, LOVE, LOVE!!!

To see more recent photos of Bullet and hear about how he’s doing, check out this page… Bullet… Part II 🙂
About The Rotty lover 2122 Articles
My name is Dr. Winnie. I earned a Bachelor of Science in Psychology from Duke University, a Masters of Science in Biology from St Georges University, and graduated from the University of Pretoria Veterinary School in South Africa. I have been an animal lover and owners all my life having owned a Rottweiler named Duke, a Pekingese named Athena and now a Bull Mastiff named George, also known as big G! I'm also an amateur equestrian and love working with horses. I'm a full-time Veterinarian in South Africa specializing in internal medicine for large breed dogs. I enjoy spending time with my husband, 2 kids and Big G in my free time. Author and Contribturor at SeniorTailWaggers, A Love of Rottweilers, DogsCatsPets and TheDogsBone