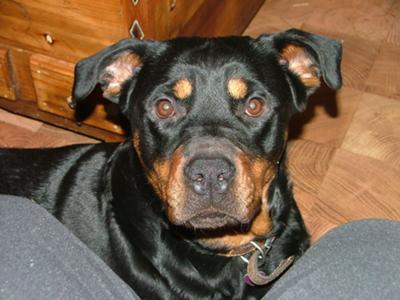 hi we have just taken a 16mth old female rottie into our home she is fantasic in every way except that she wants to be aggressive with strangers both in and outside the home.

inside the home she will growl at them then if everyone ignores her she will go round trying to get attention, then when the visitor gives into her nuzzling and licking their hand she will allow them to pet her for few mins then kicks off again same thing she has tried to snap at them a little, but as soon as i shout her she comes to my side.

outside she barks at anyone who comes too close to her but backs away from them never actually wants to attack them it’s as if it an insecurity thing.

please help how do i stop this behaviour as she is perfect in every other way including being great with young kids.

Hi Anna
I think you’ve recognized already that a big part of this behavior is due to insecurity, it sounds to me as though she’s a bit anxious around strangers and isn’t feeling secure in her new situation yet.

Given the fact that she’s 16 months old (and I’m not sure what her history is and whether or not she’s had multiple homes) and she is in a new home with new people, that’s not surprising. Also, she’s an adolescent right now, with all the accompanying challenging behavior that can accompany that stage of development (think human teenager and you’ll know what I mean), so it’s understandable that her behavior could be a bit erratic.

However, with a dog as big and strong as a Rottweiler it’s very important to set ground rules and to show her who’s in charge right away – and it’s NOT her. From what you say, she believes that you are the pack leader, so it’s up to you to reshape her behavior into what is acceptable.

I do strongly suggest that you enroll her in a basic dog obedience class as it will help you to learn how to communicate with her and control unwanted behavior, and the socialization will be very good for her. Do let the school know that you’ve only just adopted her and that she can be combative with other dogs as they may want to try a one-on-one class first or to evaluate her. Getting some formal obedience classes for her is definitely something I would do if I were in your position.

At home, make sure that she knows her place and involve your kids in taking care of her as that helps to reinforce their position as being above hers (in her eyes). Don’t allow her to lie on beds or furniture, to block doorways/hallways, or to guard food or possessions. Check out my Free Puppy Training Tips page for advice and help with at-home training. Although she’s not a tiny pup, she’s still young and will learn quickly.

Rottweilers are very intelligent dogs and they’re calm, focused and eager to please during training. However, they do need a strong and confident leader or they’ll decide to make up the rules for themselves. That doesn’t mean being harsh or punitive (that will cause them to be stubborn or even aggressive), a calm, loving but confident approach is best – and always be consistent so that she knows what to expect.

The growling at people indoors and then nudging them to pet her, and growling again, is a show of dominant behavior. She is trying to show that this is her home and she’s in charge – which she isn’t. Do correct her when she growls with a firm ‘NO’, even have her on a leash when guests are coming for now, and use a leash-pop (short, sharp tug) at the same time as the verbal correction. Don’t allow her to ‘force’ people to pet her, she must not think that she is controlling the behavior of humans. Instead have her lie down, or sit, beside you and be calm (a favorite chew toy, not a bone or edible toy if she’s shown any signs of dog food aggression) can keep her attention). If she won’t do this, you can crate her close to you so she can see what’s going on but not interrupt. Once she is more secure and confident and will listen to you, then you can try having her loose in the room again.

I hope this helps some and that you also find a trainer to give you some hands-on assistance just to get her behavior on the right path. She’s a pretty girl and very lucky to have a new, loving home and I wish you all the very best of luck.