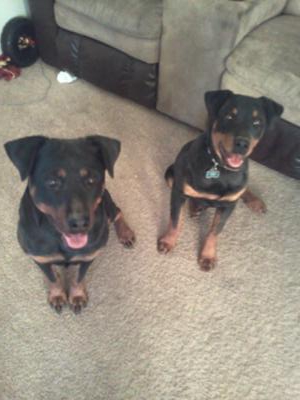 He has grown up with this dog since we bought him at 8 weeks old. I know that the 12 year old was not playing with him or provoking him in an anyway. I ran outside early yesterday morning because I heard what I thought was him playing too rough with her. But to my horror he had her in his mouth by her neck shaking her. I got him to let her go, as soon as he saw me yelling at him to stop. We had to ultimately put her to sleep because she was having trouble breathing because of the bite to her neck. She was not bleeding or mangled in anyway. So my question is why do you think he would do something like this?

Does a rottweiler puppy not know his own strength and maybe was playing too rough and can hurt a small dog without bad intentions? We socialize him and work with him almost daily. We have had him around our 4 children since the day we brought him home. He has never shown any aggression towards anyone, only a little with other dogs he doesn’t know. But as soon as he get close to the unknown dog his aggression subsides.

He is a wonderful loyal dog, and you can feel their love for you. I am really worried about this, and hope this incident doesn’t mean my dog is going to be dangerous…. :{

Hi Stephanie
This is a very difficult question to answer because it’s not possible for me to know why your Rottie pup behaved this way as it certainly seems totally out of character for him.

Rottweilers can have a very strong prey-drive, and this instinct (along with his guarding instincts) are likely to be increasing right now as he’s an adolescent rather than a young puppy. Often pups ‘don’t know what to do with’ these instincts at first and may over-react to situations. Generally, as they mature and their training and socialization continues, they learn the boundaries and how to control and understand their feelings.

Unless you were actually watching the dogs when the altercation began it’s impossible to know whether or not the smaller dog ‘provoked’ this reaction, but I would definitely agree that if she did it was entirely unintentional. It’s possible that she got over-excited, or was running and barking/yipping and this triggered your male’s prey drive. It’s a very basic instinct and isn’t something dogs think about, it’s literally an instinctive reaction and he may have grabbed and shaken her without any conscious thought being involved.

The fact that he dropped her when you told him too is good, and shows that he recognizes your authority even in a highly emotional state. Of course, that doesn’t make up for what he did at all, and I am so sorry for the pain that must have caused to you all. That’s a horrible experience to have to go through.

Right now, my personal opinion would not be to over-react to this, or assume your pup is a ‘dangerous dog’, I think that would be wrong. It could well be that this was one of those isolated incidents that can happen with dogs (or any animals for that matter) and hopefully are never repeated.

BUT I definitely think it would be wise to monitor his interaction with other, smaller dogs and pets very carefully from now on and make it clear to him that ANY show of ‘rough-housing’ or aggression isn’t tolerated. The same goes for interaction with your children if they are very young or toddlers, although I seriously doubt there’s going to be any correlation between the two. This doesn’t mean he’s ‘dangerous’ or ‘aggressive’, but you can never be too careful and it’s always best to be over-vigilant than under-vigilant.

At 9 months your pup is going through some pretty substantial developmental changes and it’s always a challenging time (think of human teenage behavior and you’ll know what I mean), but with love, patience and discipline he will get through it and hopefully grow into a calm, stable and well-behaved adult. It’s important to continue his socialization and training though, as this is something Rotties need as ongoing activities.

IF by any chance, he shows any aggression or similar behavior in the future, then I would strongly recommend seeking some professional help from a dog trainer or canine behavioral specialist so that you can ‘get to the bottom of it’. Hopefully this will never happen, but it’s always better to be safe than sorry.

I hope this helps some and wish you all the very best of luck.