A Love Of Rottweilers7 week puppy still has dew claws - what to do? | A-Love-Of-Rottweilers 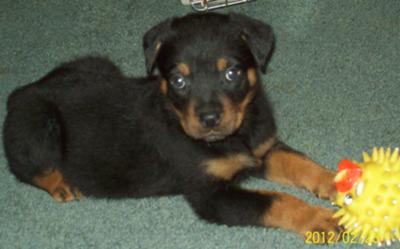 I have a 7 week old Rottweiler that still has his dew claws. Is this going to be a problem in the future and i guess it’s to late to remove now – right?

What do y’all think about Thor anyway?

Hi Robert
Although dewclaws are often removed as a matter of course within the first few days of a puppy’s life (and at the same time as the tail is being docked on breeds where that is routine), they don’t HAVE to be removed at all.

Occasionally an intact dew claw may get injured and need to be removed, or get infected, but this won’t necessarily happen. Chances are Thor will be just fine as he is.

If you really want to have them removed now you can ask your vet to do that at the same time as he is neutered, then there’s just one anesthesia and both procedures are done at the same time. However, removing those dewclaws once the pup is more than a few days old can be more difficult and painful and as it’s most likely not really necessary it’s a personal decision. I’d check the pros and cons with your veterinarian before making a decision.