A Love Of Rottweilers22 months old not neutered male has hormones problem. | A-Love-Of-Rottweilers 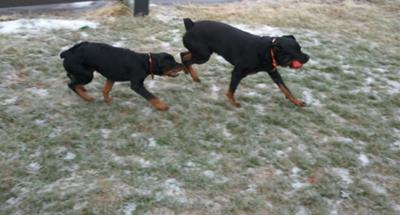 I’ve 2 rottweilers, male (22mnths)not neutered, had him since he was 8weeks old & female (10 months)not spayed, had since she was 13weeks old.

Everything was good till two days ago. they both spend time together most of the day. no aggression problem, in fact they’ll lick the death of strangers. Yesterday morning my wife called me at work saying my male dog is panting bad & whining, crying to let him hump on my female dog. we made sure if there are any sign of her going on heat but no she is not on heat.

He’ll leave her alone if i’m there but as soon as i move of his sight he wants to mount her. i understand it must be his hormones since he is getting close to 2yrs old. what can i do to handle this situation?

i put him on treadmill for hour as usual thinking once he is wore out he’ll be able to control, it worked for few mins but then he started again. please tell me how would i be able to get him out of that stress?

Hi Sumit
Your female is 10 months old and not spayed, generally a first heat cycle happens somewhere around 8 months, and even though you can’t see any signs that she’s in season I tend to think that she is.

Your male may well know something you don’t and he’s giving all the signs that she’s in heat. Sometimes during the first season there are few indications, and it could be that it’s very early days. As she is only 10 months old and not spayed I strongly recommend that you keep these two separated for the next 3 weeks. She is still a baby and much too young to get pregnant. You will need to be very vigilant about this because a male will go to great lengths to get to a female.. they’ve even been known to mate through chainlink fencing, so be strict.

Unless these are both show quality dogs and you have good reasons to want to produce puppies, I suggest that you have them both ‘altered’. It not only eliminates the chance of accidental pregnancy and unwanted puppies, but it reduces your dogs chances of developing many reproductive organ conditions (including several cancers) and will also mean you won’t have to deal with this type of stressful situation twice a year!

If your female is in season, there is nothing you can do to ‘help’ your male, he only wants one thing and nature is very determined. He will be difficult to live with until her season is finished.

Hope this helps, best of luck with your dogs, they’re beautiful.