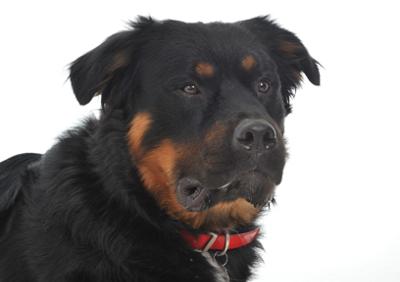 We are fostering a Rottweiler mix, for about two months now. He’s approximately 16 months. We wanted him to get used to having other people come to the house, so we invited friends, family and even ordered delivery a couple nights a week to get him used to people approaching the house.

He did fine the first month and a half, if anything he was a bit timid around new people. Within the last week though he has become very territorial and aggressive to our friends and family once they enter the house. He still does fine with people when we’re out for walks, but inside the home is another story.

He growls, barks, lunges, and the other day missed taking out a chunk of our friends arm by an inch. Sometimes after 10-15 minutes passes he calms down, other times he never calms down.

The second we notice the behavior manifesting we try to correct it by using a stern “no” and jolt on his collar, but that only corrects it for a matter of seconds. We’ve placed him in a lay and stay position. We’ve also put him on the leash and had him walk around the house, away from the guest and that seems to calm him, sometimes.

We’ve tried entering the house with our visitors, shaking their hands in front of him and at that point if we???re comfortable with his energy/behavior we allow the guest to give him a treat, but after he???s done with the treat he???s back to the aggressive behavior. Please help!

He’s a wonderful dog, shares food and toys with our own dog, loves to cuddle and give kisses and isn’t aggressive in any other manner than this.

Hi Ashley
It sounds as though your dog has a generally good temperament and is loving and well behaved, but this behavior around visitors to your home definitely needs to be dealt with.

I’d hazard a guess that he’s started to see your home as ‘his’ home and your family as his family and his behavior is just his way of expressing that to others. As he’s a foster pup chances are he’s not had much of a stable life up until now and understandably he’s very protective of what he now thinks of as something that finally belongs to him, and could also be jealous of having to share it with others!

He’s a pup and still has plenty of time to learn and obviously also listens to what you tell him and wants to please you, he just can’t quite find the self-control he needs in this particular situation though. I would think it’s totally ‘treatable’ but you’re definitely going to need some professional help to get it under control.

I’d strongly recommend getting in touch with a local dog obedience school (check out more than one if you can) and find a trainer who is familiar with large, guardian breeds and who only uses positive, rewards-based training methods. You need some hands-on help here to learn how to control your pup and what is the best way to behave and handle this aggressive/defensive behavior. It’s not something that can really be dealt with online.

With some proper training and lots of love and some efforet I expect you will be able to reshape this behavior successfully. This type of breed rarely get second chances and it sounds as though you have the makings of a fantastic family companion here, he just needs a little help to get over his insecurities. Get him some as soon as you can because he isn’t a ‘bad’ dog, but he could hurt someone if you don’t start to teach him that this isn’t acceptable, in a way he can understand.

Hope this helps, I wish you all the very best of luck.