A Love Of Rottweilers11 Month old rottie growls and barks at strangers, or friends she hasn't seen in a while | A-Love-Of-Rottweilers

by JENNIFER
(VANCOUVER, BC) 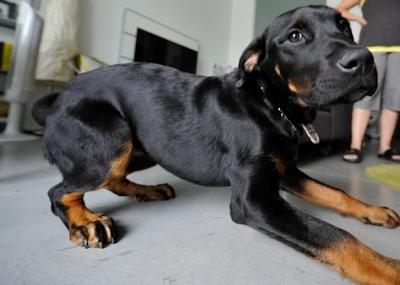 Hi,
I rescued my now 11 month old rottie from animal control when she was 12 weeks old. She was found as a stray at about 8 weeks old. She had some dominance issues with me when I first got her. I hired a private trainer right away who specializes in large breed dogs.

After a few months we were able to get the dominance towards me under control, and I feel like she respects me now as her leader…but recently (the last 2 months) she has started growling and then barking at people on the street. At first it was people wearing big coats, or hats, or sunglasses…but now it’s progressed to kids, strollers, and often absolutely nothing, just regular nothing out of the ordinary people! She wears a martingale collar and I give her a swift correction with the leash and NO NOISE command or a stern NO, but it rarely works. I do make sure she knows it’s not ok each time she does it, but nothing is working. She is even barking and growling now at people she might have been fine with a week ago! She used to just run up to everyone and love to be pet as a baby and she was the happiest pup with strangers…and now people are scared to go near her!

My trainer told me that this is part of her 2nd fear phase of her development… but it’s progressively getting worse. I really would like to get this under control…Any thoughts? Thanks!

Hi Jennifer
It sounds as though your pup is definitely going through her second ‘fear period’ (this can start anywhere around or after 8 months of age) and it’s a normal stage of development. However even if she is a bit anxious she should not be reacting aggressively in situations where there’s no provocation.

It’s very difficult for me to add anything useful in this situation because I’m not seeing her reactions or your response and don’t know the dog personally. However you have a trainer who specializes in large breed dogs and knows your dog individually so I can only really suggest that you follow his guidance and if you’re not 100% happy with it, seek a second opinion.

Rotties don’t get second chances so although it’s very important that you continue her socialization, you do need to be very careful that she doesn’t scare anyone too much, or nip/bite anyone. I don’t particularly like muzzles and prefer not to use them (both for the dog’s comfort and because people react more fearfully when they see a Rottie wearing a muzzle), but if you think it warrants that when you’re out and about then you could try a soft light one.

It sounds as though your pup may be a bit anxious in general and as you don’t know her parents it’s possible that it’s an inherited tendency. You will just need to work on building up her self-confidence and be very patient with her. It sounds as though you are correcting her in the right way and it may just take time for her to grow out of this phase.

Do try hard not to get anxious yourself as dogs are very intuitive and if you feel nervous about the potential for her to start barking, she will pick up on your anxiety levels but not understand them. She will then likely become nervous herself as she will feel that there is something scaring you, and that will increase her over-reactions. It’s sort of a vicious circle. Do your best to remain calm and don’t tighten your hold on the leash as you approach people or transfer any tension to her.

You could try keeping a handful of treats at all times and when she sees someone approaching and you see her body language become tense, call her name quietly and get her attention. Then give her a treat as the person passes you. If you do this consistently she will learn to look to you when someone is coming close and eventually to associate these types of interactions with a pleasant result. Of course, you should discuss this sort of thing with your own trainer first and follow his guidelines first.

I wish I could help more, but this really does need a more ‘hands-on’ approach. However I wish you the very best of luck with your beautiful pup, I’m sure with patience and persistence you will get through this rough period.